A few weekends ago (6/8/19 – 6/9/19) my traveling buddies Landon and Bobby and me (Asharu) hopped off on a short camping trip to a place that we had never been to before. In Sleeping Bear Dunes National Lakeshore there is are a pair of islands called the North and South Manitou Islands a few miles off the coast of the mainland.  According to legend they are the bear cubs who died while trying to swim across Lake Michigan and their Mother forms the main section of Sleeping Bear Dunes, always watching over them and waiting for their arrival.  Anyway, we decided to go to one of the islands, choosing South Manitou as our place of travel and the only way to get to it is by way of ferry.

After camping the night the before at local campground near the city of Leland, we packed up our gear and headed onto the Ferry, the ride to the island would be an hour and a half voyage across a section of Lake Michigan.  The boat ride to the island was pretty fun, as Landon fell asleep, Bobby and me headed to the Bow (front) of the boat where other hikers and campers were hanging out and enjoying the ride.  They served drinks on the boat, which was pretty awesome and the way to the island took us past giant sand dunes on the mainland and past an old lighthouse in-between the mainland and the island as it carved through the blue water of the giant lake.  It was sunny out, a comfortable temperature, there was music playing, and it was a fun ride over and it went by relatively quickly.

After the boat docked at the island we got a quick orientation on the island from the Ranger, before heading to our campsite.  Out of the three sites on the island we chose to head to the Weather Station campground, a little over two miles from the dock.  This campground was positioned on the south side of the island, near the shore, on a relatively higher elevation spot than the other two campsites, and it was closer to the things that we wanted to check out such as the dunes and the old cedar forest.  Other campers that were on the boat with us also headed to this location, which was already well populated with other campers.  After picking out our site, getting out tent set up and stringing our food and supplies in a hammock about four feet off the ground to keep it away from chipmunks we headed out to explore the island.  It was about ten minutes after 1:00pm.

We headed out on the trail that would take us right to the Perched Sand Dunes on the western side of the island stopping at several different locations on the way to the dunes.  We first checked out Florence Lake, which was a pretty good sized lake on the island, surrounded by forest and positioned closer to the southern edge of South Manitou.  Next we stopped at a lookout point high above the lake to view the 1960 Shipwreck of the SS Francisco Morazan, which was a cargo chip that was built in 1922 (Pictured below).

Then from here we walked among elder giants as we entered a section of the island forest known as Old Growth Cedars.  This was a section of the forest were giant cedar trees loomed as guardians of the woods and were around some 500 years old.  They were impressive is size and they reminded me of the living trees in Lord of the Rings, as they were stood spread apart with younger trees growing under their watch.  Some had fallen over, which was sad, but it really revealed their immense size.

Next stop was the dunes, and they were immense.  Roughly 300 feet tall at their highest points the climb to the top was a steep and hike through the forest, but as we reached the top and the tree broke we were given a view that was just something incredible.  We could view all around us for miles, the entirety of South Manitou, a good chunk of the large North Manitou, the shoreline and dunes of the mainland, and out into a seemingly endless body of vibrant blue fresh water, it felt like we were on top of the world.  While the dunes had a unique beauty to them, they were also quite deceiving, for each sand hill you walked to the top of you though was the end, that moment of glory when you finally view the long, steep slope down to the water, but you would just come to view more dunes.

The fact that the shore was so far away from the start of the dunes and that there wasn’t a trail to get there, gave us the impression that people rarely go to were the water meets the dunes.  That excited us and we decided to make the long, hot, walk through the dunes to make it to the shore.  Hill after hill yielded more dunes and at one point we followed some coyote tracks for a bit.  Eventually though we made it to the end of the dunes, some 300 feet up from the water, the sky was open and the water was so blue.  The beach below looked very untouched and rarely visited, for there were no signs of recent human activity and the dune was so steep that it would be a tough climb back up.  So, being the adventurous crew that the three of us are we charged down that last dune to get to a seemingly, rarely visited beach. 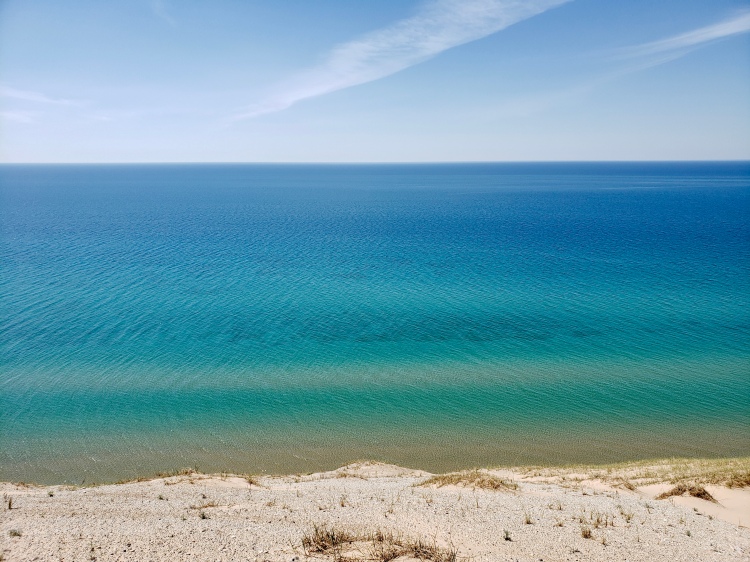 It was a surreal feeling reaching the bottom, for it was quite tranquil.  Behind us, a mountainous sand dune, hiding us from the reality of the world and any troubles in Life, in front of us was an endless sea so full of possibility, and to each side was long shoreline of a giant sand dune, even the Moon decided to make an appearance in the daytime sky.  Also there were no bugs, which was really convenient.

We decided to walk along the shore to the next trailhead, if you will, which was at the end of Popple Campground on the north side of the island, thinking that the path ahead of us would be a few miles of pristine shoreline.  This was not the case though and it was much longer than we anticipated, based on the map we had.  We were in for it.

The beach seemed to never end and every time we though we made it to the bend to get to the other side of the island we would only be shown another bend in the distance and the actual turn to make it to the other side of the island was so gradual, you could have easily missed it.  The size of the shoreline kept decreasing as well and became increasingly rocky and with trees shooting out from the shore into the water, we had to just walk into the lake at points.  After walking for quite some time and the fear of us missing the hard to spot trail head become more and more real, we came across something that we did not expect to find on this part of the island.

A fellow camper filter water from the lake into a water bottle, we were relieved to see him and he was confused to see us.  Three hikers walking through the lake, was probably one of the last things he expected to see, for he and his wife had the most remote campsite on the island and the only logical way to get to it was from the main trail, not the route we took.  If he had not been there though, we may have missed the trail and walked the entirety of the island.  He and his wife were from Missouri and saved our butts by showing us the best trail to take back and 5.5 miles later we were back at our campsite at about 6:30pm after hiking 18 miles.  Needless to say, we went to bed pretty early that night.

The next day (Sunday) after we woke up and had breakfast, we packed up our gear, took the tent down, and headed to the dock area reaching it a little before 11:00am.  We dropped our gear off at the dock house.  Our boat wasn’t coming till 4:00pm so we headed out to do some more exploring and ended up walking 6 plus miles that day.  We checked out the Bay Campground, which looked really nice and explored some more parts of the island.  The best part though was being able to go to the top of the 100 foot tall lighthouse on the island and the view was just as incredible as the view we had at the dunes the day before, we could even see the highest points of the dunes from the top of the lighthouse.  The lighthouse itself is on its own circuit, so if power to the main land goes out the lighthouse will still shine bright in the darkness, which it has been doing since 1871.

During our time waiting for the boat to arrive, a fellow camper caught an eastern hog-nosed snake that resembles a King Cobra, in the fact that it picks its head up and flairs out its neck when it feels threatened.  However, it is a snake spices that is very reluctant to bite and not harmful to humans.  In fact this species of snake and garter snakes are all over the island, we were constantly running into them.  We also reconnected with our friends from Missouri that we ran into during out ambitious hike and it was funny because they told us that they were worried about us and were glad to see that we made it and we hung out and talked with them for a couple of hours before the boat came.  Luckily, the boat came just as it started to rain and we made it back to the mainland at 5:30pm.

The three of us all made it safely back home that night and we thinking about going back to the island in the fall when the leaves of the trees on the island begin to create an array of color.  This trip was a good, short weekend expedition that introduced us to a new part of the world, helping me to draw closer to myself and re-educating us on the notion that we need to try our best to keep the world and its ecosystems beautiful so other generations can explore and experience the beauty that we do.  This place is definitely one to check out if you like backcountry camping, exploring, or hiking