This post had been a long time coming, but about three months ago back in August me and the other two from Asharu (Bobby & Landon) ventured to the city of Port Austin, Michigan to experience kayaking Turnip Rock, one of Michigan’s hidden gems and most interesting destinations.

We got to Port Austin late on a Friday night at Sunset and set up camp at a nearby campground. Our site was right on the water, which sounds pretty picturesque right? Well normally it would be, except it was very windy that night and our tent had no cover from the wind and being right on the water our sight was taking the full brunt of the wind.  With gusts up to roughly 30 mph, we worried that our large eight person tent wouldn’t make. However, the trusty Coleman tent stayed strong and withstood the windy night, the only damage was a slight bend in one of the sections of one tent pole.

Side note here: that tent had been through a lot. It survived two nights of non-stop storms in the Porcupine Mountains, which was later called a storm of the century and the aggressive wind we faced during this trip. If you are looking for a good and reliable, and affordable/reasonably priced big tent, I would recommend the Coleman MontanaTM 8-Person Tent.

Moving on, that night we headed to a dark sky preserve as the skies darkened and became lit up with stars. We were able to fully make out the spiral arm of the Milky Way galaxy that stretches across the sky and can only be seen in skies with little to no light pollution. We were also able to view the Andromeda galaxy, some 2.5 million light years away, with the naked eye and see some faint and distant Northern Lights.

In the morning we quickly packed up, grabbed some breakfast to fuel up for the days adventure, and then headed to the kayak launch site, which was operated by Port Austin Kayak. To Turnip rock and back would be a seven mile trip through the waters of Lake Huron.

The weather that day was pretty ideal for kayaking. It was warm, sunny, with little wind, unlike the night before, making for calmer waters. We made pretty good timing and we journeyed through the lake staying somewhat near the shoreline and before we knew it Thumbnail Point came into view, and right behind Thumbnail Point is Turnip Rock.

For years I had viewed pictures and heard about this strange geological formation, but to finally paddle up to it was really awesome and you instantly wonder what the first person who came across this sculpture of nature might have thought about it. Close to the shore, Turnip Rock is a towering funnel shaped structure, and because of wave action, its top half is much wider than its bottom half, resulting in its funnel or turnip shape.  On top of the rock is conifer trees and other various types of vegetation, despite is primary stone composition, adding to its uniqueness.

Turnip Rock is located on complete private property, which is why we had to access it completely by water, and it being privately owned seems to be a good thing for it helps to keep it protected. To add, a concrete collar has also been put around the bottom of the rock at the waterline to prevent further erosion.

We quickly parked our kayaks onto the small sandy section that formed a cave into the cliff-side and took in the wonder of the art that nature put on display for us, carefully taking thousands of years to gently sculpt this geologic formation. 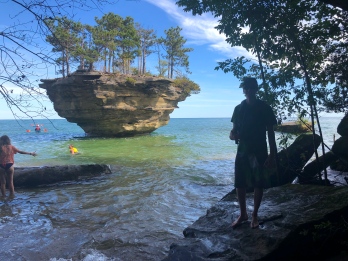 After swimming around it for a bit and snapping some pictures we decided to make the journey back to the dock. On our way back we stopped at a small sea cave and while we were in the cave we ran into a snake, which was unexpected.

After taking our time, we made the short journey back to the dock and then headed home.  Kayaking to Turnip Rock may not have been the longest journey or the most difficult, but it still made for quite the adventure. If you are ever looking for a quick activity to do in Michigan I would definitely recommend making the trip to Turnip rock so you can view this bizarre creation of nature for yourself. There is also a really cool restaurant called Pak’s Backyard, which is nice. Plus, you also get to kayak in one of the Great Lakes. Till next time…

–  Dustin from the Asharu Team