Last weekend, I headed up to Canada with a couple of friends (Bobby and Landon – Asharu) for our annual winter trip that would consist of a weekend of exploring the Canadian wilderness, catching an OHL (Ontario Hockey League) hockey game, and going skiing.  Here is how this winter trip all went down.

After we got out of work the three of us began our journey from Saginaw, MI all the way up to Sault Ste. Marie, Ontario, Canada a little after 6:00 pm.  The first chunk of the drive up to the Mackinac Bridge went smooth and we stopped in Mackinaw City to view the bridge as it stood like a tall beacon, lit up with lights in the frozen waters and cold winter night.  It was a truly wondrous sight.  I had crossed the bridge before at night a few times before, but this was the first time I had seen it lit up the way it was with lights going down from the towers and along the main cables.  The dark sky, snow covered ground, and semi-ice covered water only added to the magic.

After we crossed the bridge the next section of the drive through the Upper Peninsula of Michigan to Canada came with sections of snow covered roads and on and off snow flurries, none of which hindered our driving a whole lot.  Pretty soon though we were crossing the border and entering Canada, a place Bobby and Landon had never been to before.  We could view the Soo Locks as we crossed the Sault Ste. Marie International Bridge that carried us over the St. Marys River and into a new country.

We finally made it to our hotel, where we would be staying the next three nights, at about 10:30 pm and it happened to be right across the street from the hockey arena (GFL Memorial Gardens) that we would be catching the OHL game at on Friday.  After taking a quick night drive around the city, we headed in for the night to try and catch some sleep.

This day we would explore the wilderness of Canada, making sure to fill up on continental breakfast before heading out.  We would be traveling north along King’s Highway 17 and the primary route of the Trans-Canada Highway, stopping at various trails and lookouts along the way, as we enjoyed the scenery of the drive.  The scenery along was worth taking the drive as it was filled with snow covered forests and mountainous hills and cliffs that decorated the landscape with color and movie-like views.

The first place we stopped at was called Chippewa Falls, which is part of the Chippewa River.  We followed the snow-covered trail to the main view point of the falls and rive, which were partially ice covered, with frozen rocks and trees in and around the river and falls.  We continued along the river following game and natural trails in the forest coming to one last viewing point, which can be viewed in the second picture in the small slideshow below.  It was one of the views that was so simple, but yet dreamlike and peaceful.  During this hike my eyelashes also began to freeze, which was interesting.

After this, we continued to drive north along coast stopping at various viewing points that overlooked Lake Superior and the giant hills and cliffs in the region.  The drive alone though was almost enough just because of the scenery and the snow covered lands.  We made it about 35 km (approx. 21 miles) outside of Wawa, Ontario, Canada, before deciding to begin the journey back to Sault Ste. Marie to ensure we would have enough time to grab some dinner and make it to the hockey game on time.

We grabbed dinner at this place called Muio’s, which was a small restaurant in Sault Ste. Marie and definitely somewhere I would recommend going if you find yourself in this city one day.  Their pizza was excellent.  After dinner was the hockey game and I

was super pumped for this because our hometown OHL team the Saginaw Spirit was in town to play the Sault Ste. Marie Greyhounds and our seats were right behind the Spirit bench.  The stadium was packed and the energy was high as these two division rivals faced off and the game stayed close until the Spirit pulled away in the final minutes defeating the Greyhounds 5-2.  Spirit forward Ryan Suzuki also got a hat trick that game, which is three goals.  It was a great first full day of our trip and we went to bed looking forward to skiing in Canada the next day.

Before we would head off to the slopes, we decided to play some pond hockey at a local outdoor rink and due to the snowfall and cold winds, we were the only ones crazy enough to play through the weather.  We quickly shoveled off a small section of the rink, just big enough that we could work with and then played through the cold and the snowfall.  It was surreal to be able to play pond hockey in Canada.  We played for about an hour, before heading back to the hotel to get geared up for skiing.

As we headed out into the snowstorm once again to make it to Searchmont (Ski Resort), we grabbed a bite to eat at this place called the Pita Pit, which was really good, and then began our venture to the ski hill that was about 45 minutes away to the north.  The snow was coming down pretty hard and consistently.  This made the drive somewhat treacherous, but at the same time beautiful as the road took us through more forests lands decorated with large hills and towering cliffs.  We were also in a Jeep that had four-wheel drive, which was beneficial.

Although the path the road took looked pretty sketchy at times, Landon drove like a champ and we made it to Searchmont in about an hour and we were so pumped, because the three of us had desired to go skiing here for over a year.  Let’s just say that it lived up to its hype.  It was an impressive ski hill that was a step up from the places I had been to in Michigan.  The main chair lift alone led to around four to six different runs to take with jumps, trails through the woods, a cliff-like section, and other awesome features, so one could ride that chair life all day and not get bored. 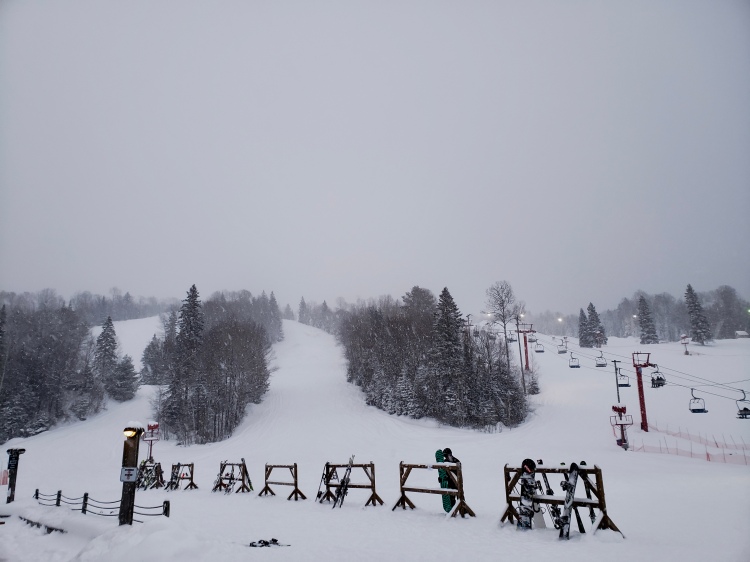 The only issue that came was that it kept snowing, which made drifts pile up on different sections of the runs making skiing a bit more difficult, but we didn’t let it stop us as we skied until it got dark out and then kept going.  We didn’t leave the hill until about after 8:00 pm and thanks to Canada’s superb snowplowing work, the journey back to Sault Ste. Marie was a breeze.  We grabbed a late night meal when we got back at a place called The Burger Don.  While the food was good and atmosphere of the restaurant was nice, what stood out to me was the story our waiter told us about how he ended up in Sault Ste. Marie.

He was originally from the Philippines and while working on a cruise ship he met a girl from Sault Ste. Marie, who would eventually become his wife, as he moved from the tropics of the Philippines to Sault Ste. Marie to be with her.  Don’t be afraid to talk the locals and fellow travelers when you go places, you never know the incredible and poetic stories they have to tell of their adventure through Life itself.

This night marked the end of our trip to Canada, for the next morning we would say goodbye to Canada and head back to Saginaw and reality.

I have been to Canada many times before, but the experiences that this gave us were pretty special, rivaling the time I got to touch the Stanley Cup at the Hockey Hall of Fame in Toronto and watch fireworks over Niagara Falls with my family many years ago.  This journey, for me, was another reminder on how awesome and beautiful a place Canada is.  The hospitality and kindness of the Canadians matches the wonder of this country’s landscapes and their efforts to protect the planet are refreshing.

It was also a great time taking two of my friends to a country and area of the world that had never been to before, that I have been in the past.  From the excitement of the drive up, to the hiking, hockey game, and skiing, this trip was filled with great moments that I’m sure the three of us will be talking about many years from now.

This trip was a reminder on how even though travelling can sometimes be nerve-wracking or a little scary it can help you learn more about yourself and help you come to peace with things in life.  Exploring the planet with awesome travel companions, even a short road trip from home, can teach you things about life, one another, and yourself, and while it may be hard to sometimes grasp, teach you to simply have faith and get ready for whatever adventure you set your eyes on.  Till next time…